This is my second "Google Maps Challenge". Nothing to buy - it's free!
Everything you need to get started is right here.
Prize: $25 Amazon gift card. (Valid only in the US).

Instructions
This Google Maps Challenge is global - the locations could be anywhere in the world. I've created a set of four clues that will lead you to specific locations that can be found using Google Maps. There are four specific locations that need to be found. All four clues must be solved to submit a valid entry for a chance to win the $25 Amazon gift card. Only one prize will be awarded. Contest ends July 31. Winner will be chosen at random on August 1 from all correct entries received by midnight (Eastern time) on July 31. If no correct entries are received by that time, I may extend the deadline.

Clue #1
I wasn't the Master but I earned that degree
When I lived within SW59ST.
You won't see a magistrate, nor a Doctor, nor duke
But you will see a box that's not meant for a juke.

Clue #2
Near where I studied there was a strange little place.
Chuck would be happy; oh the look on his face!
As George IV might take his old white horse,
I'd browse for a bit till I resumed my course.


Clue #3
Southeast of the house of mercy (or is it disgrace?)
The lion of the tribe of Judah may have passed through this place.
If you trust in what he says, you won't have to wait.
You'll get up and walk right through this gate.

Clue #4
It gets a bit chilly in the town of stars.
And to get around you won't use cars.
Wear your Sunday best and put on your fleece
When you go to visit the Queen of Peace.

Submit Your Solution
So you think you've solved it? How do you submit your entry for a chance to win the $25 Amazon gift card?

Send the following to me in an email (readandseekadventures (at) gmail):

I'm the fourth generation to live in the house I now presently own. A few years ago, my great uncle stopped by to visit the house he grew up in. He shared lots of great stories about how the house used to look. He also told us what it was like to live without plumbing.

As we looked out into the backyard, he pointed to where they had the outhouse. From time to time, they'd cover up the hole and move it another spot. The outhouse served not only as a toilet, but also a garbage disposal. They'd throw glass bottles and other assorted trash down there.

This makes outhouse locations kind of the amateur archaeologist/treasure hunter's dream. Broken glass has a constant presence in my backyard. A green piece here, a blue piece there, a clear piece everywhere. They tend to float to the surface, especially after heavy rains. 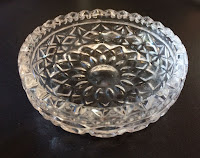 Several times, my son and I have dug in the approximate outhouse locations. So far we've only found one completely intact piece of glass. It's some kind of soap dish, candy bowl, ash tray or some other thing with an imaginative use. 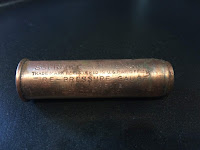 We also pulled out the metal detector to search around the areas. Doing this helped us narrow down a couple more long lost treasures. The first was a vintage Schrader-Universal tire pressure gauge from the 1910s-1920s. Pretty cool find! 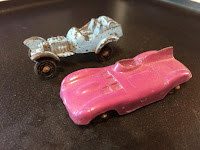