I considered trying to encase the dollar bill in wax so it would have additional protection from the elements. Then my wife picked up these nifty little bottles from the store and I convinced her to let me have one. If you find the hidden cache, you'll need to return the dollar bill to me in order to claim the hundreds of dollars in Amazon gift cards. 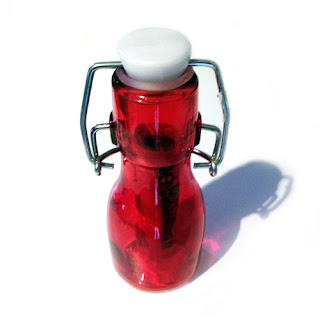 While I didn't pay thousands of dollars for an uber cool bronze chest (like someone else you may know), I figure I might as well show y'all what you're looking for. It's water-tight, extremely functional and should be able to withstand nature's elements in the Midwest for years to come (if needed).

On September 25, Dal Neitzel featured my book on his website. If you're not an avid Forrest Fenn treasure searcher, you'll want to check out Dal's website. As I've mentioned before, the whole Read and Seek adventure has been inspired by Forrest Fenn and The Thrill of the Chase. My poem, in a sense, is an homage to Forrest Fenn. So go to Dal's website, poke around and see what others are saying about Forrest's poem. You may gain some insight into my poem.

Here's the write up I did for Dal's site:

When I first joined the Chase in March 2013, I thought I had a good chance of deciphering the poem and boosting my retirement fund. Well, more than two years later and after a dozen trips into the mountains North of Santa Fe, I still think I have a good chance of deciphering the poem. The problem is I ran out of ideas. I was content with my solve. Every part of the poem fit together like a puzzle for me. Scrapbooks and interviews only reinforced my interpretation. I searched the same area every time I went out and I couldn't let it go. I suspect this might sound familiar.

So I decided to take another approach. In order to try to get into Forrest's mindset as to what would make a good hidey spot and yet be a retrievable location, I decided to try to replicate what he did. I figured that if I had a place, a poem and a book wherein I could sprinkle clues (er uh hints), I might be able to circle back and figure out where I went wrong with my solution to Forrest's poem from the experience I gained by going through the exercise myself.

There's a poem at the end of my book that needs to be deciphered in order to find the cache I've hidden. I tried to keep the same feel, using some of the same words that Forrest used. The context may be different and the usage may be different, but again, it's my attempt to approach solving his poem from another direction. It's my attempt to put on the shoes (slippers?) of the architect to see if any light bulbs get illuminated.

While my "treasure" isn't worth a million dollars, its value will keep growing until it's found. The main prize is Amazon gift cards that I'm earning using various loyalty and rewards programs. Right now the pot is worth a bit more than $300. The cache contains a dollar bill that must be returned to me as proof that you've solved the clues. Once you've returned the dollar bill to me, you'll receive the posted value of the gift cards.

The cache also contains a few other prizes: an ancient Greek coin (from 350-300 BC), a Roman ring that could be 1700 years old, twenty steel pennies from 1943, a pair of earrings donated specifically for this adventure by Dominique Moceanu (Olympic gold-medalist) and more.

I should also mention that there are two versions of the book available: a full color version and a black and white version. I initially intended the book to be full color because I included a number of photographs from my life and travels that I feel are most enjoyed in color. But when I was done and saw the printing costs I realized nobody would ever buy it. So I created a black and white version to help get the retail down. Other than the color there's no difference between the two.

I began working on this adventure in January and now I'm excited to say that all the parts are in place! My cache is hidden and my book has been published. Somewhere in the Midwest north of Hell (but south of Paradise) my "geocache" is hidden. Maybe you can find it.

You can learn more and buy the book (through createspace or Amazon) here:
http://www.readandseek.com/p/buy-book.html

If you're interested in the color version, you can use code 2LP52X2T [no longer valid] to receive 15% off (if purchased through createspace). But again, the black and white version is exactly the same as the color version and about half the price.

Finally, I think this is another great example of the positive impact that Forrest, the Chase and Dal's website have made on countless lives. Had I not been involved in the Chase, I would have never thought about doing this. If no one ever buys this book, I've already been rewarded enough by watching my kids read through it and ask all sorts of questions about my childhood and growing up. And I feel I've also gained valuable insight into Forrest's poem. There's sure to be another trip into the mountains in the near future!

Thanks for taking the time to read and good luck in the Chase!