20 steel pennies from World War II. Coins are dated 1943. Production of this wartime cent was provided for in the Act approved December 12, 1942, which also set as the expiration date of the authority December 18, 1946. Low grade carbon steel formed the base, to which a zinc coating .005 inches thick was deposited on each side electrolytically as a rust preventative. The same size was maintained but the weight was reduced due to the use of a lighter alloy. Operations commenced February 27, 1943. The copper released was enough to meet the combined needs of two cruisers, two destroyers, 1242 flying fortresses, 120 field guns and 120 howitzers; or enough for one and one-quarter million shells for our big field guns.

On January 1, 1944, the Mints were able to adopt a modified alloy, the supply being derived from expended shell casings which when melted furnished the composition similar to the original but with only faint trace of tin. The total weight was restored. 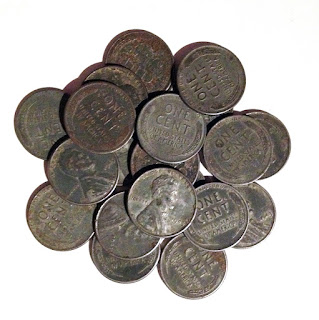