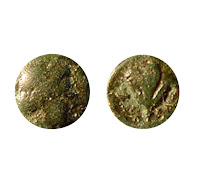 Rhodes occupied a vital strategic position in the south-east Aegean. With fertile terrain, and thanks also to the commercial sense of its inhabitants, it played an important role in the Aegean from as early as the 8th century BC. Towards the end of the fourth century, the development of trade led to the creation of an early form of township, and Rhodes developed into a major cultural crossroads with routes from the north-east Aegean and the Asia Minor hinterland to the rest of the Aegean and the north-east Peloponnese.

Three Rhodian cities, Lindos on the east coast, Ialysos near the north end of the island, and Kameiros on the west coast, struck Archaic coins before the synoecism of 408 BC. Beginning in the early 4th c. BC, the new mint located in Caria developed into the most important. When the cities were liberated from Athenian rule in 411 BC, they created a new capital that bore the same name as the island itself. After that time, coins were struck only in the name of the Rhodians.

The depiction of the rose on the reverse is a representation of the name of the city (rose, in Greek rhodos), which was famous for its roses, after which it was named.