The other night I had a dream. In the dream, it was a warm spring evening and the sky was crystal clear. I was sitting by myself on the curb looking up at all the stars. I was finding some of my favorite constellations. To the north I saw Draco first so named by Ptolemy in the second century. Draco comes from the Latin word for “dragon”.  Nearby Draco (to the East) is the constellation Hercules. If you remember your Greek mythology, there was a dragon (named Ladon) who guarded the golden apples of the Hesperides. One of the twelve labors of Hercules was to steal the golden apples. Hercules ended up killing Ladon in the process. So there they are, captured for all of time to see, locked in an epic battle above our heads.

Looking West from Draco, you can find another epic story from Greek mythology. After slaying Medusa, Perseus went to the realm of Cepheus to rescue Andromeda (daughter of Cepheus) who was about to be sacrificed to the sea monster Cetus. Using Medusa’s head, Perseus turned Cetus into stone. Eternally grateful and instantly in love, Andromeda and Perseus got married. His new mother-in-law (Cassiopia) must have been proud. Now they’re one big happy family up in the heavens.

It was about the time that I was having that thought in my dream, when a couple of deer came walking across the street in front of me. As they proceeded to lay down by my side, one of them snuggled up close to me and put his head on my leg. In one of those instantaneous flashbacks, I had a flood of memories. Years ago, while on the way to my brother’s house for dinner on Memorial Day weekend, my sister and I saw the car in front of us hit a fawn. The mother and another fawn had safely made it across the street, but this poor guy didn’t. At first we thought he wasn’t seriously hurt. Maybe he had somehow escaped injury.

As the car who hit the deer sped off, my sister and I stopped. The fawn was flailing about, not able to stand up. When I approached I could see that two of his legs (both on the right side) were broken. The mother deer and other fawn stood on the edge of the wood watching us, not knowing our intentions. As the injured fawn kept trying to stand up, but failing, I couldn’t take it anymore. I picked up the little guy and held him closely so he wouldn’t do more damage to his legs. I examined him and there didn’t appear to be any other injuries. As he cried for his mom, I looked over and made eye contact with her. At that point, the mother and other fawn slowly turned and walked away. It was as though, through the momentary stare, she had entrusted her fawn to my care. 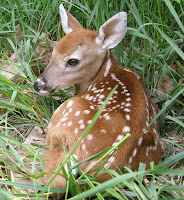 We got back in my sister’s car and, with the deer in my lap, continued to my brother’s house. My dad called the vet on their emergency number. The vet was heading out of town, but said he would come back to take a look at the deer. We had to wait about three hours. We tried to have dinner while the deer lay in the back of my brother’s truck, but the deer had other ideas. Scared, hurt and confused, he kept thrashing about. I left the table and spent the next couple of hours in the back of my brother’s truck, holding the deer.

After taking x-rays and examining the deer, the vet said the little guy was actually quite lucky. The breaks were “clean” and easy to set and the deer had no other injuries. The vet had a friend up North who owned a wildlife rehabilitation center that sat on lots of land. He’d set the legs and take the deer to the friend’s place, hopefully to live out a long and peaceful life.

That was about 18 years ago. I’m not sure what I believe about animal spirits and the afterlife. And now I’m even less sure. Maybe my little deer had just finished out that long and peaceful life and had stopped by to say thanks as he began his next journey. I never gave him a name all those years ago. I’m thinking "Hercules" might be a good one.