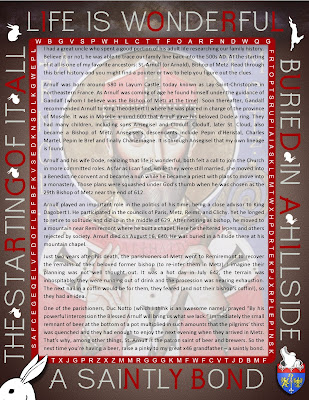 Now let's look at the rabbits. Notice how they travel around the border and end up going into a rabbit hole? The rabbit hole leads you to the coat of arms for Lay-Saint-Christophe. In this case, don't follow the white rabbit! The only rabbit that would point you in the correct direction is the one in the bottom left corner. The "rabbit ears" feature prominently. These indicate a TV antenna, which also indicate that you should be looking for TVs/movies to find the actor's name.

Left side phrase: The Starting Of It All
TV show: Big Bang Theory (also hinted at by the image of the galaxy at the top)
Top side phrase: Life Is Wonderful
Movie: It's a Wonderful Life
Right side phrase: Buried In A Hillside
Answer (not a TV or movie): The cemetery where the actor is buried is Hillside Memorial Park Cemetery.
Bottom side phrase: A Saintly Bond
TV Show: The Saint (played by Roger Moore who also played James Bond). However, Roger Moore is not the actor you're looking for. The Saint was also a radio show.
By cobbling these together, you could find an actor who was common to all of them: Sheldon Leonard.
Big Bang Theory: the modern TV show had characters "Sheldon" and "Leonard" who were named after Sheldon Leonard because the writers were fans of his.
It's a Wonderful Life: Sheldon Leonard was the bartender "Nick."
Hillside Memorial Park Cemetery: Sheldon Leonard's burial site.
The Saint (or The Adventures of The Saint): In the radio series, Sheldon Leonard played various gangsters and heavies.
To help you out, I actually added Sheldon Leonard's name across St. Arnulf's vestments. If you compared the original image of St. Arnulf to the one I used in my hunt, you'd notice the runes were an addition. But how would you decipher the runes? If you searched for St. Arnulf and read his story from other sources, you'd notice that his mentor is commonly spelled Gondulf. I changed the spelling to match Gandalf to match Tolkien's character from The Hobbit and The Lord of the Rings. Gandalf would lead you to the correct runes.
Finally, the name of the hunt "Family Ties" was the title of an episode of the Danny Thomas show that was directed by Sheldon Leonard. I figured no one would identify this clue, but thought it was a nice easter egg after I had created the hunt and needed to come up with a name. 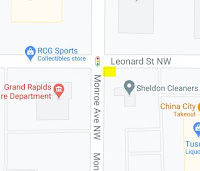 Now about the riddle... Where in Grand Rapids would Sheldon Leonard lead you? This could be tricky because there's a street called Sheldon and a street called Leonard. Only one of them is the correct street. To help identify the correct one, and if you weren't familiar with the business, I gave you a little bit of guidance with the "fifth," which indicates the fifth president - Monroe. Monroe intersects with Leonard (and not Sheldon). Once you found Leonard and Monroe, you should see Sheldon Cleaners. Bazinga!

The street sign also includes the phrase "original city boundary" (calling to mind the anagram for "original boundary") as it was the original northern boundary for the city of Grand Rapids. 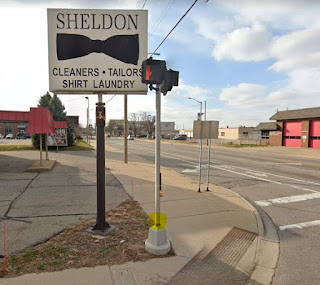 I placed the medallion on the pole of the pedestrian light, just below the button. It stayed there for a good month, right in plain sight, until I retrieved it after Mo and Bill submitted the armchair solution.