GRRiddler + 2022 expired on October 31, 2022. No one found the medallion, so I win! But don't worry, the prizes will be rolled over to the next Grand Rapids Riddler treasure hunt which starts on Tuesday, November 8. The solution to GRRiddler + 2022 can be found in the description of the video on YouTube.
For GRRiddler 2022, Derek went and found the medallion in December 2021. So the 2022 hunt was solved before the year even started! Where's the fun in that?
So, new tradition. Everybody's got a "plus" these days. Now the Grand Rapids Riddler has one too. If a hunt is solved before January 1, that triggers a spring hunt called GRRiddler +.
The hunt is over! Here's the riddle:
Like all the other Grand Rapids Riddler hunts, the main prizes will be some sort of silver  and a carbon monoxide detector. I've been giving away current year U.S. Mint silver proof sets in previous hunts. 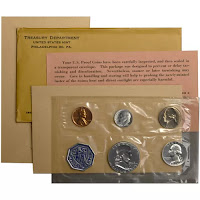 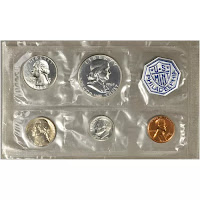 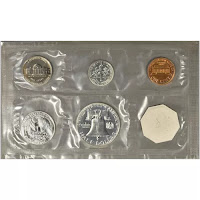 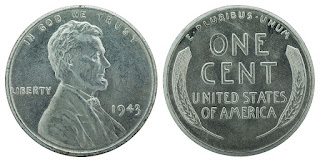 Steel Pennies
In addition to the 1963 Proof Set, the winner will also get a set of 10 steel pennies from 1943. The pennies were struck in steel due to wartime shortages of copper. The Philadelphia, Denver, and San Francisco mints each produced these 1943 Lincoln cents. The unique composition of the coin (low-grade steel coated with zinc, instead of the previously 95%-copper-based bronze composition) has led to various nicknames, such as wartime cent, steel war penny, zinc cent and steelie. The 1943 steel cent features the same Victor David Brenner design for the Lincoln cent which had been in use since 1909.
Due to wartime needs of copper for use in ammunition and other military equipment during World War II, the United States Mint researched various ways to limit dependence and meet conservation goals on copper usage. After trying out several substitutes (ranging from other metals to plastics) to replace the then-standard bronze alloy, the one-cent coin was minted in zinc-coated steel. This alloy caused the new coins to be magnetic and 13% lighter. They were struck at all three mints: Philadelphia, Denver, and San Francisco. As with the bronze cents, coins from the latter two sites have respectively "D" and "S" mintmarks below the date.
However, problems began to arise from the mintage. Freshly minted, they were often mistaken for dimes. Magnets in vending machines (which took copper cents) placed to pick up steel slugs also picked up the legitimate steel cents. Because the galvanization process did not cover the edges of the coins, sweat would quickly rust the metal. After public outcry, the Mint developed a process whereby salvaged brass shell casings were augmented with pure copper to produce an alloy close to the 1941–42 composition. This was used for 1944–46-dated cents, after which the prewar composition was resumed. Although they continued to circulate into the 1960s, the mint collected large numbers of the 1943 cents and destroyed them.
The steel cent is the only regular-issue United States coin that can be picked up with a magnet. The steel cent was also the only coin issued by the United States for circulation that does not contain any copper. (Even U.S. gold coins at various times contained from slightly over 2% copper to an eventual standard 10% copper to increase resistance to wear by making the pure gold coins slightly harder).
One of a Kind Winner's Mug
You wouldn't be a winner without the winner's mug! So here it is. Same style and design as the winner's mug for GRRiddler 2022, but your get a "+" added to it.

Join Welch for a close-up of the characters and themes that shape this timeless story of resilience and redemption. You'll be reminded that life's most important work is often the work we never planned to do, that God can use the most unlikely among us to get the job done, and that grace is the greatest gift we can possibly give.
Discover why It's a Wonderful Life is more than just a holiday tradition--it's an inspiration for us to lead better lives, to become people of honor and integrity, and to recognize what really matters.
Posted by MartinS at 20:31