Congratulations to Steve from Ohio who submitted correct answers to all four clues! Like many of us in the "treasure" hunting world, Steve enjoys the chase as much as the quarry. He says, "Not only do you get the thrill of the AHA moment, but it is very fun and rewarding to actually learn about the history behind the events." Great job Steve!

Clue #1
More than a century has gone by
And memories are fading away.
But some still pause to cry
For the tragedy that struck on Boxing day.

Once you're on track you'll find what you need.
Seek a sign and write what you've seen.


This one should have led you to think of some sort of tragedy involving a train more than 100 years ago. A bit of googling would have eventually turned up something like this news story or interesting information about those who lost their lives on that sad day. 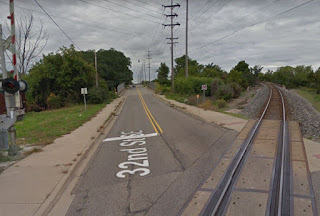 Text: I would accept a few different options for this one. Steve mentioned all three! Standing at the intersection of the track and 32nd street, there are two signs that can be seen from here. 1) No Parking sign (P with circle and slash), and 2) Downhill grade (symbol of truck going downhill). The Stop on Red Signal signs cannot be seen here, though I would have accepted them as well.

Clue #2
Three sizes of the same
Stand on display.
Miss Gherardini by another name
Might have something to say.

Once you've drawn nigh you'll find a dent on the wall.
Look to the left and write the first name that you saw.

Miss Gherardini might have been the key to this one. Discovering that Lisa Gherardini was the inspiration for the Mona Lisa (whose smile suggests she might have something to say) would have led you to Leonardo da Vinci. Connecting da Vinci to Grand Rapids would lead you to Frederik Meijer Gardens where the American Horse Sculptures are on display (3 sizes).

The phrase "drawn nigh" also hints at da Vinci's sketches which were drawn and "nigh" means "near" or "on the left". As you get closer to the smaller statues using Google street view, you'll see plaques on the wall. (Google has used "street view" in many parks and non-"street" places around the world. Check it out!). 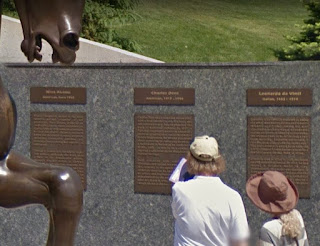 The middle plaque has the name Charles Dent (dent on the wall). To the left is the plaque with "Nina Akamu". Nina Akamu is the artist/sculptor who brought Leonardo da Vinci's horse to life.

Clue #3
You're so fine
Was something Bob never said.
It was just a line
So don't let it go to your head.

Once you've found where he is, there's really only one way in.
Look to the right and take note from beginning to end.

This one proved to be a bit tricky for quite a few people but Steve nailed it. "It was just a line" indicates that "You're so fine" was a line a from a song. In fact, it was the title of a song by The Falcons. "Bob" was Robert Manardo, one of the founding members of The Falcons in 1955. He was drafted into the military and left the group in 1957 before "You're So Fine" exploded onto the charts in 1959. Hence, Bob never said "You're so fine". 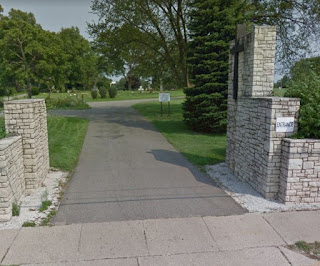 "There's really only one way in" has a couple of meanings here. The first is as a hint to the cemetery where the only way "in" is to die. The second meaning hints at the place you're looking for on street view (which also ties in to the text you needed to find)...the entrance. Since street view doesn't actually go into the cemetary, this is as far as you can get.

Clue #4
Let your attitude be
A lamp that can heal.
Sometimes it's free
To eat a Heavenly meal.

Once you've found your spot, it can be a real pane.
To the left is a sign for what kind of lane? 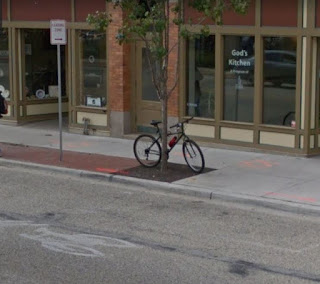 The first line of this one might bring to mind the "Beatitudes" (let your attitude be). A lamp that can heal, which hints at "Guiding Light" helps you get close, but not to the exact point you're looking for. Located nearby is God's Kitchen (a Heavenly meal). It can be a real "pane" was misspelled on purpose because you need to find "God's Kitchen" written on the window (pane of glass). From there you can see either the bike lane sign on the pavement or the "loading zone" sign on the sidewalk.