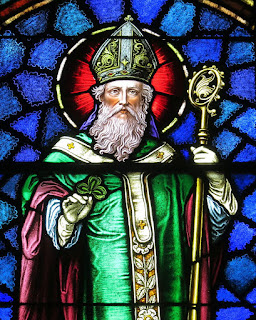 Ok...Saint Patrick's feast day is March 17. But I figured it might be good to learn about something more than shamrocks and green beer. Legend credits Patrick with teaching the Irish about the doctrine of the Holy Trinity by showing people the shamrock, a three-leafed plant, using it to illustrate the Christian teaching of three persons in one God. The shamrock has since become a central symbol for Saint Patrick's Day.

Saint Patrick (c. 386 – 461) (Latin: Patricius; Irish: Pádraig [ˈpˠaːd̪ˠɾˠəɟ]; Welsh: Padrig) was a fifth-century Romano-British Christian missionary and bishop in Ireland. Known as the "Apostle of Ireland", he is the primary patron saint of Ireland, the other patron saints being Brigit of Kildare and Columba. He is venerated in the Roman Catholic Church, the Anglican Communion, the Lutheran Churches, and in the Eastern Orthodox Church as equal-to-the-apostles and Enlightener of Ireland.

According to the Confessio of Patrick, when he was about 16, he was captured by Irish pirates from his home in Britain and taken as a slave to Ireland, looking after animals; he lived there for six years before escaping and returning to his family. After becoming a cleric, he returned to northern and western Ireland. In later life, he served as a bishop, but little is known about the places where he worked. By the seventh century, he had already come to be revered as the patron saint of Ireland.

Patrick was born in Roman Britain. Calpurnius, his father, was a decurion and deacon, his grandfather Potitus a priest, from Banna Venta Berniae, a location otherwise unknown, though identified in one tradition as Glannoventa, modern Ravenglass in Cumbria, in what is now England; claims have been advanced for locations in both present-day Scotland and Wales. Patrick, however, was not an active believer. According to the Confession of Saint Patrick, at the age of sixteen he was captured by a group of Irish pirates. They took him to Ireland where he was enslaved and held captive for six years. Patrick writes in the Confession that the time he spent in captivity was critical to his spiritual development. He explains that the Lord had mercy on his youth and ignorance, and afforded him the opportunity to be forgiven his sins and convert to Christianity. While in captivity, he worked as a shepherd and strengthened his relationship with God through prayer, eventually leading him to convert to Christianity.

After six years of captivity he heard a voice telling him that he would soon go home, and then that his ship was ready. Fleeing his master, he travelled to a port, two hundred miles away, where he found a ship and with difficulty persuaded the captain to take him. After three days' sailing, they landed, presumably in Britain, and apparently all left the ship, walking for 28 days in a "wilderness" and becoming faint from hunger. After Patrick prayed for sustenance, they encountered a herd of wild boar; since this was shortly after Patrick had urged them to put their faith in God, his prestige in the group was greatly increased. After various adventures, he returned home to his family, now in his early twenties. After returning home to Britain, Patrick continued to study Christianity.

Patrick recounts that he had a vision a few years after returning home:

I saw a man coming, as it were from Ireland. His name was Victoricus, and he carried many letters, and he gave me one of them. I read the heading: "The Voice of the Irish". As I began the letter, I imagined in that moment that I heard the voice of those very people who were near the wood of Foclut, which is beside the western sea—and they cried out, as with one voice: "We appeal to you, holy servant boy, to come and walk among us."

A.B.E. Hood suggests that the Victoricus of St. Patrick's vision may be identified with Saint Victricius, bishop of Rouen in the late fourth century, who had visited Britain in an official capacity in 396. However, Ludwig Bieler disagrees.

He studied in Europe principally at Auxerre, but is thought to have visited the Marmoutier Abbey, Tours and to have received the tonsure at Lérins Abbey. Saint Germanus of Auxerre, a bishop of the Western Church, ordained him to the priesthood.

Acting on his vision, Patrick returned to Ireland as a Christian missionary. According to J. B. Bury, his landing place was Wicklow, Co. Wicklow, at the mouth of the river Inver-dea, which is now called the Vartry. Bury suggests that Wicklow was also the port through which Patrick made his escape after his six years' captivity, though he offers only circumstantial evidence to support this. Tradition has it that Patrick was not welcomed by the locals and was forced to leave and seek a more welcoming landing place further north. He rested for some days at the islands off the Skerries coast, one of which still retains the name of Inis-Patrick. The first sanctuary dedicated by Patrick was at Saul. Shortly thereafter Benin (or Benignus), son of the chieftain Secsnen, joined Patrick's group.

Much of the Declaration concerns charges made against Patrick by his fellow Christians at a trial. What these charges were, he does not say explicitly, but he writes that he returned the gifts which wealthy women gave him, did not accept payment for baptisms, nor for ordaining priests, and indeed paid for many gifts to kings and judges, and paid for the sons of chiefs to accompany him. It is concluded, therefore, that he was accused of some sort of financial impropriety, and perhaps of having obtained his bishopric in Ireland with personal gain in mind.

From this same evidence, something can be seen of Patrick's mission. He writes that he "baptized thousands of people". He ordained priests to lead the new Christian communities. He converted wealthy women, some of whom became nuns in the face of family opposition. He also dealt with the sons of kings, converting them too. The Confessio is generally vague about the details of his work in Ireland, though giving some specific instances. This is partly because, as he says at points, he was writing for a local audience of Christians who knew him and his work. There are several mentions of travelling around the island, and of sometimes difficult interactions with the ruling elite. He does claim of the Irish:

Never before did they know of God except to serve idols and unclean things. But now, they have become the people of the Lord, and are called children of God. The sons and daughters of the leaders of the Irish are seen to be monks and virgins of Christ!

Patrick's position as a foreigner in Ireland was not an easy one. His refusal to accept gifts from kings placed him outside the normal ties of kinship, fosterage and affinity. Legally he was without protection, and he says that he was on one occasion beaten, robbed of all he had, and put in chains, perhaps awaiting execution. Patrick says that he was also "many years later" a captive for 60 days, without giving details.

After years of living in poverty, traveling and enduring much suffering he died March 17, 461. He died at Saul, where he had built the first Irish church. He is believed to be buried in Down Cathedral, Downpatrick.