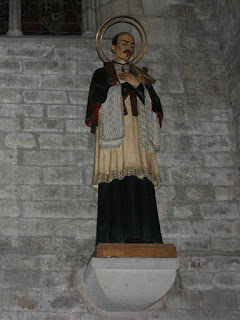 Apostle of Barcelona who lived on bread and water for twenty-six years. He was born in Barcelona, Spain. He studied at the University of Barcelona and received his doctorate in theological studies on 1 August 1674. He was ordained as a priest on 30 May 1676. In 1686, he made a pilgrimage on foot to Rome.

A beloved figure in Barcelona, he was committed to helping the sick and the poor. Joseph was also a famed confessor, miracle worker, and prophet. The dying, the blind, the deaf and dumb, the lame, and the paralytic, were said to be instantly cured by him.

He is buried in the Santa Maria del Pi Church in Barcelona.

Source: Wikipedia
Posted by MartinS at 00:00