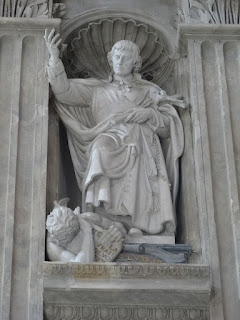 Saint Louis-Marie Grignion de Montfort (31 January 1673 – 28 April 1716) was a French Roman Catholic priest and Confessor. He was known in his time as a preacher and was made a missionary apostolic by Pope Clement XI.

As well as preaching, Montfort found time to write a number of books which went on to become classic Catholic titles and influenced several popes. Montfort is known for his particular devotion to the Blessed Virgin Mary and the practice of praying the Rosary.

Montfort is considered as one of the early writers in the field of Mariology. His most notable works regarding Marian devotions are contained in Secret of the Rosary and True Devotion to Mary.

The Roman Catholic Church, under the pontificate of Pope Pius XII, canonized Montfort on July 20, 1947. A "founders statue" created by Giacomo Parisini is located in an upper niche of the south nave of St. Peter's Basilica.

He was born in 1673 in Montfort-sur-Meu, the eldest surviving child of eighteen born to Jean-Baptiste and Jeanne Robert Grignion. His father was a notary. Louis-Marie passed most of his infancy and early childhood in Iffendic, a few kilometers from Montfort, where his father had bought a farm. At the age of 12, he entered the Jesuit College of St Thomas Becket in Rennes, where his uncle was a parish priest.

At the end of his ordinary schooling, he began his studies of philosophy and theology, still at St Thomas in Rennes. Listening to the stories of a local priest, the Abbé Julien Bellier, about his life as an itinerant missionary, he was inspired to preach missions among the very poor. And, under the guidance of some other priests he began to develop his strong devotion to the Blessed Virgin Mary.

He was then given the opportunity, through a benefactor, to go to Paris to study at the renowned Seminary of Saint-Sulpice towards the end of 1693. When he arrived in Paris, it was to find that his benefactor had not provided enough money for him, so he lodged in a succession of boarding houses, living among the very poor, in the meantime attending the Sorbonne University for lectures in theology. After less than two years, he became very ill and had to be hospitalized, but survived his hospitalization and the blood letting that was part of his treatment at the time.

Upon his release from the hospital, to his surprise he found himself with a place reserved at the Little Saint-Sulpice, which he entered in July 1695. Saint-Sulpice had been founded by Jean-Jacques Olier, one of the leading exponents of what came to be known as the French school of spirituality. Given that he was appointed the librarian, his time at Saint-Sulpice gave him the opportunity to study most of the available works on spirituality and, in particular, on the Virgin Mary's place in the Christian life. This later led to his focus on the Holy Rosary and his acclaimed book the Secret of the Rosary.

Even as a seminarian in Paris, Montfort was known for the veneration he had toward the angels: he "urged his confreres to show marks of respect and tenderness to their guardian angels." He often ended his letters with a salutation to the guardian angel of the person to whom he was writing: "I salute your guardian angel". He also saluted all the angels in the city of Nantes, a custom that, it appears, he repeated when he entered a new village or city.

One of the reasons why Saint Louis Marie de Montfort had such devotion to the angels is that veneration of the pure spirits was an integral part of his training and also of his culture. His college teachers, the Jesuits, were known for their zeal in propagating devotion to the angels. Montfort's seminary training under the Sulpicians brought him into contact with the thought of Cardinal de Bérulle and Olier, both of whom had deep veneration for the angels. Furthermore, in the course of the seventeenth and eighteenth centuries, manuals of piety and treatises on the pure spirits were numerous.

He was ordained a priest in June 1700, and assigned to Nantes. His great desire was to go to the foreign missions, preferably to the new French colony of Canada, but his spiritual director advised against it. His letters of this period show that he felt frustrated from the lack of opportunity to preach as he felt he was called to do.

In November 1700 he joined the Third Order of the Dominicans and asked permission not only to preach the rosary, but also to form rosary confraternities. He began to consider the formation of a small company of priests to preach missions and retreats under the standard and protection of the Blessed Virgin. This eventually led to the formation of the Company of Mary. At around this time, when he was appointed the chaplain of the hospital of Poitiers, he first met Blessed Marie Louise Trichet. That meeting became the beginning of Blessed Marie Louise's 34 years of service to the poor.

Montfort set off to make a pilgrimage to Rome, to ask Pope Clement XI what he should do. The Pope recognized his real vocation and, telling him there was plenty of scope for its exercise in France, sent him back with the title of Apostolic Missionary. On his return from his long pilgrimage to Rome, Montfort made a retreat at Mont Saint Michel "to pray to this archangel to obtain from him the grace to win souls for God, to confirm those already in God's grace, and to fight Satan and sin". These occasions gave him time to think, contemplate and write.

For several years he preached in missions from Brittany to Nantes. As his reputation as a missioner grew, he became known as "the good Father from Montfort". At Pontchateau he attracted hundreds of people to help him in the construction of a huge Calvary. However, on the very eve of its blessing, the Bishop, having heard it was to be destroyed on the orders of the King of France under the influence of members of the Jansenist school, forbade its benediction. It is reported that upon receiving this news, he simply said, "Blessed be God."

He left Nantes and the next several years were extraordinarily busy for him. He was constantly occupied in preaching missions, always walking between one and another. Yet he found time also to write: his True Devotion to Mary, The Secret of Mary and the Secret of the Rosary, rules for the Company of Mary and the Daughters of Wisdom, and many hymns. His missions made a great impact, especially in the Vendée.

The heated style of his preaching was regarded by some people as somewhat strange and he was poisoned once. Although it did not prove fatal, it caused his health to deteriorate. Yet he continued, undeterred. He went on preaching and established free schools for the poor boys and girls.

The bishop of La Rochelle had been impressed with Montfort for some time and invited him to open a school there. Montfort enlisted the help of his follower Marie Louise Trichet, who was then running the General Hospital in Poitiers. In 1715 Marie Louise and Catherine Brunet left Poitiers for La Rochelle to open the school there and in a short time it had 400 students.

On August 22, 1715, Trichet and Brunet, along with Marie Valleau and Marie Régnier from La Rochelle, received the approbation of Bishop de Champflour of La Rochelle to make their religious profession under the direction of Montfort. At the ceremony Montfort told them: "Call yourselves the Daughters of Wisdom,[3] for the teaching of children and the care of the poor." The Daughters of Wisdom grew into an international organization and the placing of Montfort's founders statue in Saint Peter's Basilica was based on that organization.

Worn out by hard work and sickness, he finally came in April 1716 to Saint-Laurent-sur-Sèvre to begin the mission which was to be his last. During it, he fell ill and died on 28 April of that year. He was 43 years old, and had been a priest for only 16 years. His last sermon was on the tenderness of Jesus and the Incarnate Wisdom of the Father. Thousands gathered for his burial in the parish church, and very quickly there were stories of miracles performed at his tomb.

Exactly 43 years later, on April 28, 1759, Marie Louise Trichet also died in Saint-Laurent-sur-Sèvre and was buried next to Montfort. On September 19, 1996, Pope John Paul II (who beatified Trichet) came to the same site to meditate and pray at their adjacent tombs.

Source: Wikipedia
Posted by MartinS at 13:35