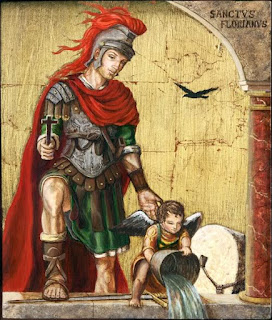 Saint Florian (Latin: Florianus; 250 – c. 304 AD) was a Christian holy man, and the patron saint of Linz, Austria; chimney sweeps; soapmakers, and firefighters. His feast day is 4 May. St. Florian is also the patron of Upper Austria, jointly with Saint Leopold.

St. Florian was born around 250 AD in the ancient Roman city of Aelium Cetium, present-day Sankt Pölten, Austria. He joined the Roman Army and advanced in the ranks, rising to commander of the imperial army in the Roman province of Noricum. In addition to his military duties, he was also responsible for organizing and leading firefighting brigades. Florian organized and trained an elite group of soldiers whose sole duty was to fight fires.

During the Diocletianic Persecution of Christians, reports reached Rome that St. Florian was not enforcing the proscriptions against Christians in his territory. Aquilinus was sent to investigate these reports. When Aquilinus ordered Florian to offer sacrifice to the Roman gods in accordance with Roman religion, Florian refused. Florian was sentenced to be burned at the stake. Standing on the funeral pyre, Florian is reputed to have challenged the Roman soldiers to light the fire, saying "If you wish to know that I am not afraid of your torture, light the fire, and in the name of the Lord I will climb onto it." Apprehensive of his words, the soldiers did not burn Florian, but executed him by drowning him in the Enns River with a millstone tied around his neck.

His body was later retrieved by Christians and buried at an Augustinian monastery near Lorch. Later a woman named Valeria had a vision in which she saw him; Florian, in this vision, declared his intent to be buried in a more appropriate location.

Saint Florian is very widely venerated in Central Europe. The Austrian town of Sankt Florian is named after him. According to legend, his body was interred at St. Florian's Priory, around which the town grew up. His body, recovered and was eventually removed to the Augustinian Abbey of St. Florian, near Linz, Austria.

Saint Florian was adopted as patron saint of Poland in 1184, when Pope Lucius III consented to the request of Prince Casimir II to send relics of Florian to that country. Kraków thus claims some of his relics.

A statue of Florian by Josef Josephu was unveiled in Vienna in 1935. It stood at the main firehouse of Vienna, in the city's main square, Am Hof. After the firehouse was bombed in 1945 during World War II the statue was moved on to the Fire Brigade Museum (Wiener Feuerwehrmuseum).

Seeking the sponsorship of a helpful saint was and still is a part of the namegiving practice in Catholic areas. In the southern, Catholic parts of the German Empire (mainly present Bavaria and Austria), peasants regularly have used the name, Florian, as one of the given names for at least one of their male children: to secure the saints patronage against fire. Hence the given name is still widespread in these areas. In Austria and Germany, fire services use Florian in radio communications as universal call sign for fire stations and fire trucks. The call sign Florentine for firefighting-related, hand held radio equipment is also derived, somewhat inaccurately, from that usage.

St. Florian is the patron of Austria; also firefighters, chimney sweeps, and brewers. He is invoked against fires, floods, lightning, and the pains of purgatory.

A famous St. Florian's Church is located in Kraków. His veneration has been particularly intense since 1528, when a fire burned the neighborhood without destroying the church. 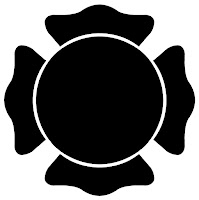 Fun Fact
The St. Florian's cross is a widely used symbol of firefighting, especially in the United States.


Source: Wikipedia
Posted by MartinS at 00:01