One Man's Privy is Another Man's Treasure 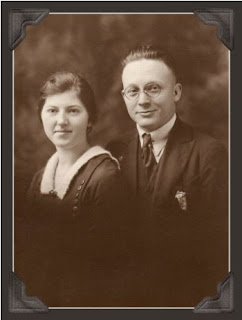 If you've read my mini-memoir/treasure hunt book, Seek and Ye Shall Find (the hunt is over but the book is still available for sale), you may recall that I'm the fourth generation of my family to live in my house (my children are the fifth!). Those are my great-grandparents and original owners of the house, Beryl and Floyd.

Back when the house was built in 1923, they didn't have many of the modern conveniences we enjoy today. One such convenience we take for granted is plumbing, specifically toilets. Many years ago, my great uncle (son of Beryl) came back for a visit. He was born in the house (I mean physically born in the house) back in 1925. As we walked through the house he shared stories about how it was when he was growing up. Then, as we surveyed the backyard, he pointed out where they would put the outhouse. There were three large trees in the backyard and they provided ample concealment, so the outhouse remained generally out of sight. From time to time, they would relocate the outhouse to stand behind one of those trees. 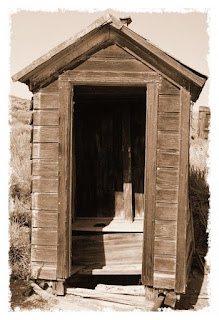 Fun fact:  When you think of old outhouses, you might imagine a crescent moon or a circle or a star on the door. The crescent moon, symbol for the Roman moon goddess, Luna, indicated a ladies’ outhouse. The circle or star was symbolic of the sun and the Greek male sun god, Apollo so that would be the mens' outhouse.

Another modern "convenience" we have is regular trash pick up and recycling. Back in the day, that wasn't always the case. So the pits below the outhouses were also used as garbage disposal. Archaeologists and treasure hunters enjoy finding old outhouse locations (or garbage dumps) because you can often learn a lot about a culture by examining what they threw away. You can also find some interesting treasures.

Those three trees in my backyard are now gone. Old age and insects got the best of them. However, I still know the general areas. So, the other day I took my metal detector and began a quest to find an outhouse location. After a number of false hits, I finally struck gold (or maybe brown; sorry for the potty humor). Figuratively, of course. If you're a follower of the Forrest Fenn treasure, you've heard the jokes about putting in below the home of Brown in order to find the treasure. Well, the joke is more true than you might think! You won't find Fenn's treasure there, but if you can find an old outhouse location, you'll likely journey through time. And if you're lucky enough, like me, to know whose outhouse it was, you can imagine that way back in a simpler time, your ancestors were in that very same spot...but doing something very different. 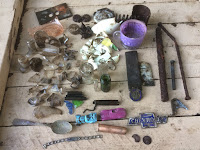 Anyway, I wish they would have been more gentle with their glass disposal! The photos to the right are most of my finds so far. I found lots of broken glass. And lots of rusty metal (not shown). But there are some pretty neat treasures. 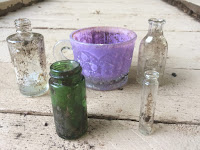 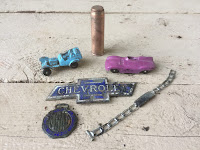 Some of my favorites are (click the images to see larger photos and better detail):

I'm still excavating, but the hits are drying up so I'm not expecting any more super exciting discoveries. Once I'm convinced I've reached the end, I'll fill it back up and look for the other two sites.

If you live in an old neighborhood and have a backyard, maybe take a metal detector out back and see what you can dig up. You might have treasures just waiting to be found.