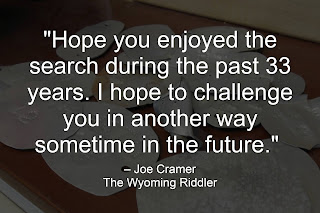 After three decades of treasure hunts, Joe Cramer retired as the Wyoming Riddler in 2014. Do you know any of his other riddles? Please let me know in the comments section below or send them to me directly via email (readandseekadventures [at] gmail).

Click here to learn more about how I'm continuing this tradition as The Grand Rapids Riddler (including the second annual hunt that begins on November 3).

This was the Wyoming Riddler's last riddle:

"Perhaps riding a bicycle, perhaps not. But how he got there is important. He knew that it changed a lot of things. If you are the first one to know, you'll find it. If you look, that is."

"It is near a sign of change, somewhere South of 28th, in between Grandville and Kentwood. Question: Why? Exclamation: Oh! Vase: Ming. Everyone clear on that? OK!"

"Eventually did come change but his end came first. It's good to remember: Near means by, not at!"

"You can get there either way. Number one and two others between two and nine will help in two ways. But, never all three together."

"Between hints in the riddle, it's there. Amongst the clues, even closer to where. 156, but not all together. To keep it fair: two mean him, two mean there."

How he got there= Haughey street
Riding a bicycle, perhaps not = bicycle path
He = male gender is relevant
It changed a lot = James Buchanan began debate regarding abolition of slavery.
First to know = discovery
Why, Oh, Ming = Wyoming
Eventually did come change = historical figure
By not at = near Buchanan
Numbers 156 but not all together = 15th president and 56th street
Posted by MartinS at 13:20