A short while ago I started working on The Secret, specifically the St. Augustine portion. I'll confess right off that I don't have a book and I haven't read the book. I probably really should. So I'm pretty much a newb, so please forgive any faux pas.

Anyway, I kind of picked the St. Augustine one basically because I'd like to go to Florida again someday. I haven't been there since my childhood when we used to go for three weeks to visit my great-grandmother in Bradenton. That was thirty some years ago. I want to go back. The Secret would give me an excuse.

General consensus is that St. Augustine seems to be the right place. But where in St. Augustine? A lot of focus has been on the Fountain of Youth. Certainly, I think it was a key location in confirming the city. But a few things are making me think the casque is hidden further south. So let me jump right into it. Maybe these are stretches, but who knows... :) 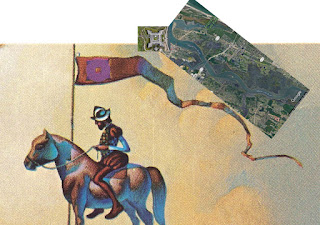 1. Another general consensus I think is that the flag in the image has the Castillo de San Marcos (covered up by a circle as an after thought?). Others have suggested the shape of the flag is representative of the waterways. I think it specifically refers to Matanzas River. The shape is strikingly similar. This gives me the feeling that he's pointing south, not north towards the Fountain of Youth. 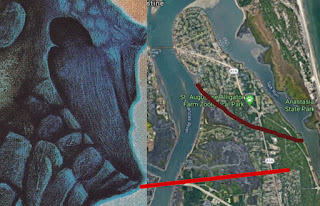 2. The enigmatic texture of the mountain/face features a purposeful shape that must have been the first part drawn in that bit of the drawing, with other shapes drawn around it - the strange feather looking shape. I haven't seen this suggested anywhere, so maybe it's my first original thought (yay!). I think the image bears a pretty good resemblance to Anastasia area (though not directly proportional, but still interesting). Notice the lines below the shape also somewhat resemble the loops in the park. 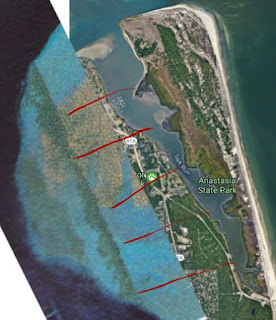 3. This one is super interesting to me, since I've not seen it anywhere else. So maybe another original thought? (double yay!) I have seen much discussion about the swampy bits at the bottom of the water. Staying around the Anastasia area, the swampy bits in the image seem to line up pretty well with the Salt Run. I've drawn some red lines to show points of comparison. There are others (even on the other side of the Salt Run) that seem to line up as well, but I have not drawn lines because I didn't want to overwhelm the chance for comparison. The match up isn't exact. However, we're looking at decades of changes that may have changed the coast line a bit. But still, I think it's a pretty good candidate. 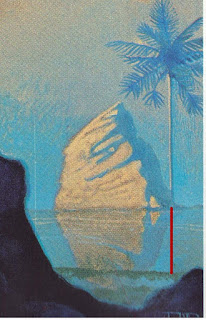 So what do I think this means? Well, looking at the poem, I've seen others making a great case for the area around the lighthouse and referencing the alligator park. Lots of the lines of the poem match up to this area and I think it's a good candidate, but I'm going a little bit further south.

Like the FOY, I think the lighthouse area may be a waypoint, not the final destination. Perhaps the poem moves from north to south. It starts at the FOY (the first chapter), goes past the lighthouse (men with wind rose), keep going (you can still hear the honking), past the boat docks (sails pass by night....when they're coming back to dock), but I skipped some stuff. 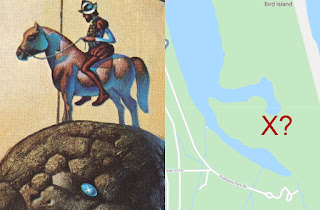 Now going back to the painting and taking another look at the man on the horse. I just saw someone else point out the shape of the foot relates pretty well to the shape of this water inlet at the bottom of the Salt Run, almost precisely where my red line points from the base of the tall tree. Interestingly, the man's foot in the image seems to be directly above an X which is directly above the gem. Is this an "X marks the spot"? (I just realized my "X" is in the wrong spot in the picture I made. Oops. Imagining the end of the Salt Run being the leg of the horse, the X should be more to the East and under the "toe", not in front of it. Maybe it's closer to the beach even?)

Of course, satellite imagery shows much different terrain. The boot is barely discernible. And I imagine it's pretty marshy over there. I've never been, so I have no idea.  But, to me, this south end of the Salt Run and the general area of Anastasia State Park seems to be a good candidate. I'm going to keep researching and see what else I can come up with.

Another thing that I want to work on is what appears to be a silhouette or skyline. I'd really like to figure out what this is. On the left side, I can imagine a lighthouse. In the middle, maybe a tall pedestal with a statue on top (maybe a bird?). It's kind of the ultimate Rorschach test. 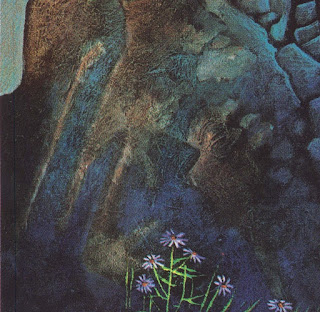